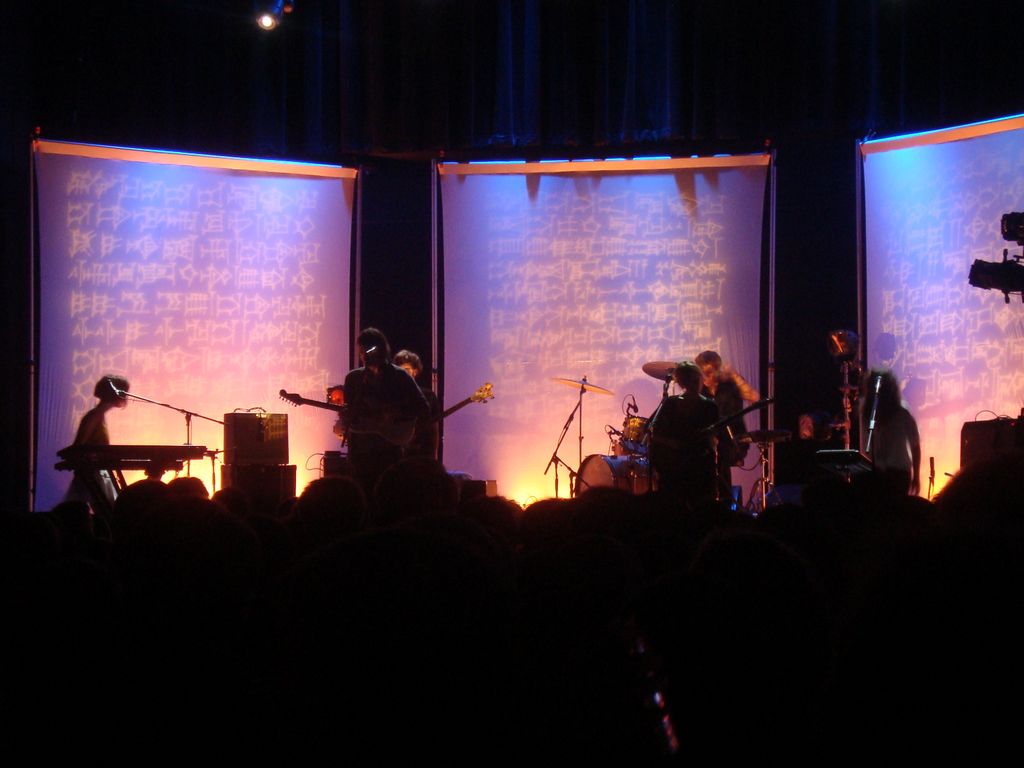 We are smack dab in the summer concert series and Thursday night kept it going strong.  It was back to Emo’s East, or Emo’s I guess what it is now, to see the almighty Dirty Projectors with a little appetizing sauce that was Wye Oak.  It was a truly indie night and the show helped clear the palette for what I’ve been through.  Im’ not saying it’s the turning point of the summer, but it definitely marks the spot where I’ve been musically.  All the bases are covered now except for rap, but that’s okay.  So how did they do?

Emo’s East, you are  a lovely beast.  The treat for me and my lady the last couple of weeks was to show up when  the doors opened up.  Welp, we got tired of waiting around for at least an hour ar at shows so we decided to start showing up about an hour after the doors opened.  For some cases that was okay but Thursday night cut it close.  Emo’s  scanners died without our knowledge and we were left to wait in line to get in.  That is, until we spied ticket takers at the end strapping wrist bands on.  Apparently if you have hard tickets, you could get scanned in and now suffer the will call sprawl.  So pro tip:  get the hard , actual tickets wherever possible.  We did and we walked right in.

Wye Oak was up on the big ole stage rocking out when we strolled on in.  The somewhat indie type band teased us with hard rock here and there.  What I found out during the set was it was 2 piece setup.  I think t that’s what took away from the performance.  I enjoyed the complete set but I was totally distracted by the drummer who also happened to sport a keyboard at his side.  I get with technology that you can get away with that, but for some reason it took away from Wye Oak’s show.  Yes, the lady rocked and it was  an earful but I felt a little cheapened by the fact that the backing samples were also guitars.  I’m not sure it showcased the lady’s guitar skills so much.

Dirty Projectors took the stage and they washed away any dirty feeling I had walking in and throughout the show.  I’m a producer myself and what I’ve learned mixing wise is that you need to give space to each instrument/voice so they can breathe in the song.  I haven’t seen such a representation live like I’ve seen Thursday night.  The band was all over the place in terms of play and style but they always left space for the distinct sounds to shine through.  It really expressed itself when the ladies would harmonize together.  Wow, it was quite the treat.  They played hard and tight and I walked out like I had my teeth cleaned.  All refreshed and somewhat chalky.

More importantly, I walked out happy.  The show started out as a lucky break for us, as the line was still spilling in after Wye Oak finished.  It ended up being a pleasant journey through a musically talented virtual town.  If you are looking for distortion and other loud rousing ideals, don’t check these guys out.  But hey, if you want to kick back in your empty glass frames and hug that Salvation Army sweater tight feeling all good about life and shit, then most certainly check Wye Oak and the Dirty Projectors out.  No pretentiousness needed.