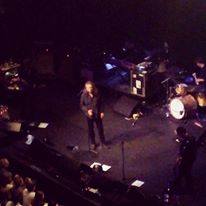 Very rarely do I go off the regular price grid and snap up some Stub Hub tickets, but I did for Robert Plant and the Sensational Space Shifters at the ACL Moody Theater.  Since my concert going has increased dramatically in the last couple of years, I usually compare my experience with how much I paid for the ticket.  This time around, while Robert Plant tried his best, the venue and fan experience did not make it worth it.

I’m going to switch things up and talk about the show first.  Robert Plant is a god.  He is a rock god.  He also lives in Austin.  If there’s anything more representative of how I perceive Austin, it was his performance on Jun 23.  Yes, it was a ‘greatest hits’ type show, but with a new twist.  He performed almost rearranged versions of his and his bands’ legendary work.  So while I relived some great songs, I also got a new taste.

Robert Plant pushed most of the rearrangements into electronic and psychedelic territory.  That is absolutely perfect in my eyes.  He even dipped into some West African sounds with the help of his band mates.  All in all, it was a mind expanding experience and I can now notch that classic rock hole in my musical belt.  If you get a chance to see him, do it quick.  He’s still relevant and still making new music, even if it’s with old material.

Now on to my major issue.  ACL Moody Theater.  I’m not sure how popular it is with others but it seemed like every other facet of the concert going experience was a target of ambush by every employee and every function of this joint.  Between the security, or lack thereof, and the lack of proper concessions, it seriously almost harshed my music buzz.  I don’t care how good the seats or the sound is.

Security lines do a good job of keeping booze and weapons out.  When they turn their focus to cameras, it goes south.  Now I understand a TV tapings and the need to control the media there, but if it’s just a show then it should be allowed in.  Nope.  I got turned around.  After I came back and got in, I noticed enough people sneaked cameras in.

Which led to another terrible experience.  The security guys walking around and flashing lights at people whom they think are taking pictures went way overboard.  Every couple of seconds someone would text or check in and the lights would come up and distract from the show.  And it didn’t stop people from taking pictures either.

I tried to take it easy by enjoying a fresh drink and eating some tasty concession food.  But don’t look to do that at ACL Moody Theater.  While cold, the drink prices were exorbitant and the only food they had was a bbq sandwich stand that consisted of a warm cooler and hot dog buns.  For such a staunch and premium location, you’d figure they’d match it with quality.

Seriously, ACL Moody Theater sucks.  If you have to go to show there, don’t spend any money inside.  There’s cheaper drinks outside and better selection of food.  I mean, it’s downtown Austin, you can find all that just not in the theater.   Also, be sure to not in any way attract any attention or else it’s flashlights and full body pat downs (yes it’s true).  It was my last time there.  Thankfully, Robert Plant transcended all that negativity and made it a night to remember.