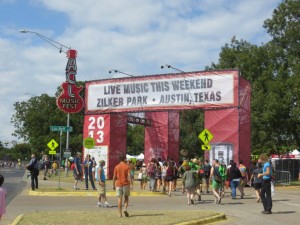 So this year’s Austin City Limits Music Festival was quite the jubilee, even though it ended short and wet for me.  Yes, I got a three day pass but it ended up being two days.  It was useful, however, because I bailed hard on my leg and am not just getting over this limp.  The shows were all what I hoped for and more. I missed out on the beginning of Friday’s events because of work but it didn’t stop me from catching the end of Widowspeak.  But that just got the day started.  I also got to see the likes of Pinback, Queens of the Stone Age, and Vampire Weekend.  I knocked Jon Spencer Blues Explosion off the bucket list.  Desert Noises rocked out. There was one big surprise for the whole weekend for me. 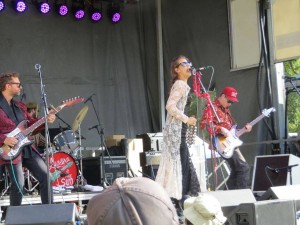 Luella and the Sun blew my ass out of the water.  If you just peer up at the previous paragraph, you know that I’m into some heavy blues driven rock and roll.  Luella and the Sun drive that home with more soul than anything else.  The guitar playing was exquisite.  Luella shrieked and wailed and shook every part of my body to the bone.   If you get a chance to see this band do it. 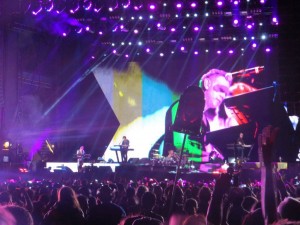 Now the close out for the first night delivered Depeche Mode.  I forgot about all of the good songs these guys have.  Most importantly, I forgot about the guitar driven dance beats they pumped up.  I Feel You was the jam of the day.  Now I need to find me some leather pants.

Day two saw me taking advantage of the Samsung Galaxy obstacle course of tasks to get the super secret pass to their lounge.  What did that mean?  It meant free drinks for the rest of the day.  Oh and food too.  But that didn’t stop me from checking out rest of the 2nd day’s lineup.

I watched Mona go for the big one when they sung Shoot The Moon.  Haim brought the LA sound just right.  I got rained out by The Cure.  Willco, Bright Light Social Hour, and Silversun Pickups all got crossed off on my bucket list.  Deap Valley was the girl version of The White Stripes.  Grimes left me feeling kind of weird. 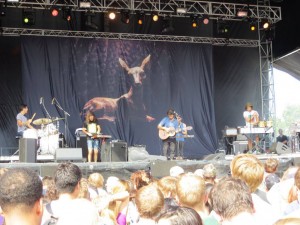 Junip was the main reason I bought tickets.  Well, the main reason I felt vindicated by getting the souvenir tickets.  The smooths are something left for a chill radio station, but pulsates just fast enough to dance too.  It’s like a Wes Anderson movie.  Quirky, compelling, but not exactly on center.  All in all a great afternoon ride.

Kings of Leon really closed the night out for me.  It was before the big rain and during my binge at the Samsung Galaxy Lounge.  I have a love/hate relationship with those guys.  The first two albums are some of my favorites, but they turned all Aerosmith and went light.  They still rocked it hard.  Man The Bucket hits me hard everytime.  I forgot how good Notion was too.  Achievement unlocked.

So the rains came down during The Cure, aptly enough, and it was time to go home.  The terrible bus ride home left us halfway there and we had to get a cab.  The next morning the news broke while we waited for the bus.  The floods of Zilker park meant no more show.  I didn’t feel like running around for the pop up shows downtown and I most certainly didn’t want to wait 7 hours in line at the ACL Moody theater of all places and pay 10 bucks for Atoms for Peace.  I’m sure it was great, but I already a blast of a weekend.